A heavy tow truck was needed last week when a semi truck and trailer loaded with hay just outside of Eugene veered off a two-lane road and tipped into the adjacent water retention ditch.

We don’t know exactly why the semi and trailer veered into the ditch, However, since it happened in the middle of the day we suspect a distraction occurred with the driver.

So, to all those tow truck drivers out there be careful out there while you are on the road. Avoid distractions and get plenty of sleep. 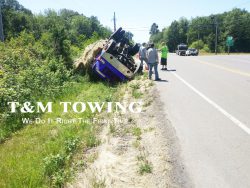 Details of Heavy Tow Truck with Hay in Eugene