T&M is no stranger to offering assistance with camper towing. Even still, when they received a call for help transporting five burned up travel trailers, it was clear that this situation was a bit different. Losing these RVs was a tragedy that nobody saw coming.

On December 8, 2019, T&M Towing Service was called to the scene of an RV lot at the Guaranty RV body shop off SW Bryant Street and SW Kalmia Street in Junction City, Oregon. The Junction City department had been summoned after reports of a fire at the lot around 2:30 AM. Five new RVs were engulfed in flames when a nearby, and occupied, trailer caught fire. The blaze caused several propane tanks to also explode.

Russell Alexander had been living in a trailer on the lot when he woke up to a fire in the bathroom. Despite Alexander’s attempts to save his belongings, the camper began burning out of control, eventually spreading to the surrounding motorhomes and causing over $100,000 in damages. Luckily, nobody was severely injured, although Alexander was transported to the hospital for smoke and chemical inhalation. Police charged him with five counts of reckless burning with the possibility of more citations pending investigation.

By the time T&M arrived, the flames had been contained and extinguished, leaving RV debris and frames in their wake. Luckily, the camper towing team knew exactly what to do and had brought multiple heavy wreckers and flatbeds to the location.

First, T&M’s team maneuvered the heavy wrecker closely to the scorched motorhome. After collecting any cauterized debris pieces, they attached a winch hook to the travel trailer. This allowed them to winch the RV up onto a flatbed truck. They then secured the frame into place using cables before carting it off for proper disposal. The camper towing team repeated the process for each of the remaining motorhomes.

While the blaze caused extensive damage, no one was seriously injured thanks to the quick response of the Junction City Fire and Police Departments. T&M’s camper towing team was happy to assist. 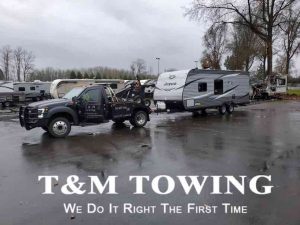 Camper Towing in action being removed from the scene 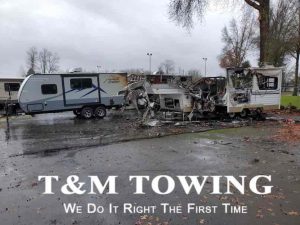 The after math prior camper towing

Details of Camper Towing in Eugene