As a heavy towing company, it’s a privilege and an honor to help those in a time of need. However, sometimes towing scenes can be a little rough sometimes. And getting calls in the middle of the night, especially when it’s been raining, often means someone got hurt.

Two weeks ago, we got a call from the Coburg Police at 4 am.  It was rainy, and the caller said we had a rollover. A semi with two trailers rolled far off the road. One of the trailers was damaged so bad we couldn’t move it. Both drivers of the semi had been hurt in the crash. The Oregon Police said they were immediacy taken to the hospital.

The recovery was a massive effort that required us to use many of the pieces in our heavy duty towing fleet. We brought out our 60-ton rotator, two heavy wreckers, a landoll trailer, a lowboy trailer, two medium duty flatbeds and a medium duty wrecker.

Since one of the trailers (from the accident) was damaged, we were forced to spend a great deal of time unloading the boxes from one trailer and re-loading them onto another trailer. The whole job took our eight-member team over 12 hours. 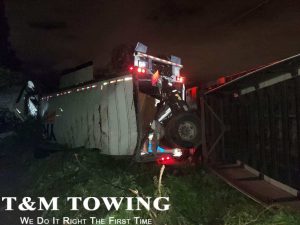 Trailer on side before recovery 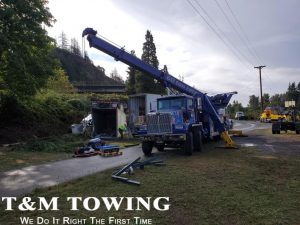 Heavy Wrecker in Midst of Recovery During Heavy Towing 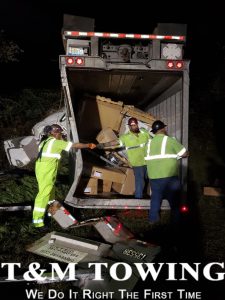 The heavy towing team gathered together and started to work. First, they hooked up the 60-ton rotator to the 1st trailer. The hook attached to the frame of the trailer. They pulled the trailer up and moved it over to the narrow roadway. The team attached a hook to the second trailer. They heavy heavy towing team then pulled the second trailer up and moved it to the narrow roadway. The team then set out to move every box from the damaged trailer to the trailer that could be moved. This was a time-consuming part of the job and took hours and hours.

The team also finished the heavy towing job in Coburg which is just outside of Eugene. The attached the rotator to the semi cab and pulled it up and out. Great job to everybody on the team