The T&M Tow Company was contacted last week after a terrible accident to a Chief Cherokee and semi, near Eugene, Oregon. While trying to pass on a two-lane highway, the driver of the Chief Cherokee ran directly into a semi hauling a fifth wheel loaded with lumber. The Chief Cherokee was mangled. The semi ran off the road and the fifth wheel holding the lumber blew off upon impact.

The tow company team arrived to find quite a mess. The four-person, tow company team first winched the Chief Cherokee onto a flatbed. Next, they needed to unload the logs that hadn’t fallen. They placed them onto a backup trailer. Then they unhitched the fifth wheel from the cab so they could be handled separately The trailer was uprighted with a rotator and heavy wrecker working together. Next, the tow company team uprighted the cab.

T&M Towing urges everyone out there to please be careful out there. We hate seeing things like this. 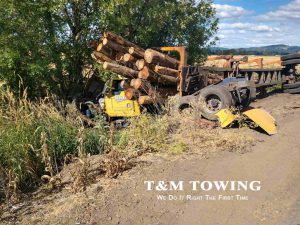 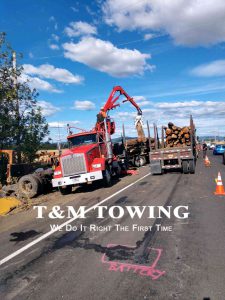 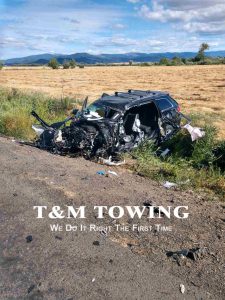 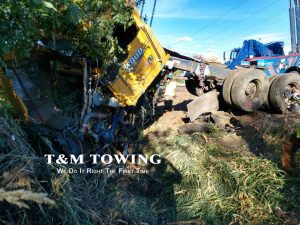